Città della Pieve is a small town, famous for its historical monuments. Its origins are still doubtful, but as early as the II century AD. a group of Christians settled here building the old “Pieve di San Gervasio”. The modern name of the city comes probably from that expression. But the town however had several different names like Monte di Apollo, Castelforte di Chiuscio, Salepio or Castrum Salepia.

Before the Christian era, the area lived under the Etruscan and – later – Roman domination. During the Middle Age were built most of the fortifications we can still admire in Città della Pieve, like the  “Public Tower“, “La Rocca“, “Palazzo della Corgna“.  In the past, with its 5 towers, the Rocca was an amazing defence against external invasions. Today only two towers are left, but is still looks impressive and attracts lots of visitors.

The Palazzo della Corgna, on the other hand, stands in the center of the city and is one of the oldest palaces that belonged to the Corgna family. Tourists can visit it and admire the library inside, called the “Municipal library Francesco Melosio“.

There has been talk of the historical attractions of Città della Pieve. Among these, another important element is Palazzo Bandini, which dates back to the Renaissance period. Inside there is the seat of the municipality.

Città della Pieve and the paintings of Il Perugino

There are many attractions in Città della Pieve, although the size of the town is quite small. First of all, the location is very famous for the paintings of one of the most important painters of the Renaissance ; Pietro Vannucci, detto ,  “Il Perugino“. Vannucci was the master of Raphael. 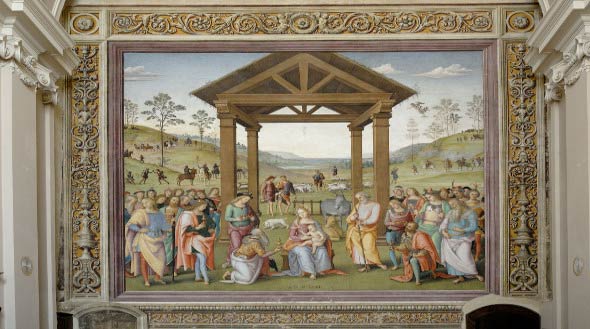 The most striking artwork by Perugino you can find in Città della Pieve is the Adoration of the Magi, on a wall in the Oratory of Santa Maria dei Bianchi, located in via Pietro Vannucci.

The numerous cardinals who have settled in this city over the centuries ordered the construction of many churches and basilicas.

Another important and very ancient church where you can admire Perugino’s opera is the Cathedral of Saints Gervasio and Protasio, which dates back to the VIII century AD. Here you can find a beautiful painting at the entrance: it is The Baptism of Christ of 1510. In the apse there is another stunning painting by Pietro Vannucci: a panel representing the Madonna in Glory between the patron saints Gervasio and Protasio, signed and dated 1514. Lastly In the Church of Santa Maria dei Servi, just outside the walls, you can admire the Deposition of the Cross , dated 1517

Events in the town

Don’t miss the chance to attend the famous  “Palio dei Terzieri”. It is an event that takes place since the middle age. It is an archery competition with 700 participants, who wear typical original clothes. Actually the event occurs in August.

If you want to admire the beauties of Città della Pieve, click here and contact us. We can organize your entire holiday in this hidden treasure in the middle of Italy.